Portugal may have hoped for a 2004 Handover of Macau to China, instead of 1999 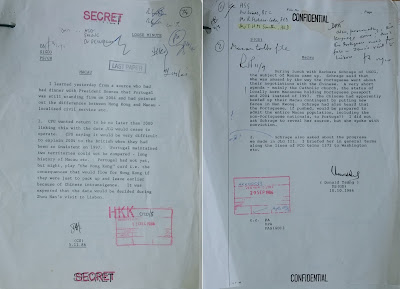 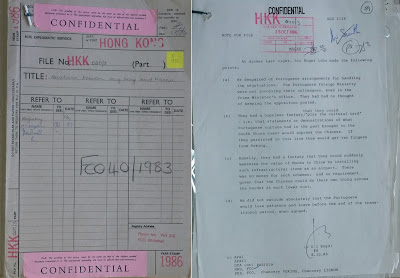 Declassified: Portugal may have hoped for a 2004 Handover of Macau to China, instead of 1999
Donald Tsang, Hong Kong’s ex-chief executive who was deputy secretary of General Duties Branch at the time, mentioned the year in an internal report about his lunch with Barbara Schrage of the US Consulate-General in Hong Kong.
“Schrage said that she was amused by the way the Portuguese went about negotiations with the Chinese. A very short agenda – mainly the Catholic Church, the status of locally born Macanese holding Portuguese passport and 2004 instead of 1997,” he wrote on October 10, 1986.
“Schrage had also heard that the Portuguese, if pushed, would be prepared to admit the entire Macau population, including the non-Portuguese nationals, to Portugal! I did not ask Schrage to reveal her source, but she spoke with conviction.”
David Akers-Jones, the Hong Kong chief secretary at the time, also mentioned the year in a paper on November 5, 1986. “I learned yesterday from a source who had dinner with President [Mário] Soares that Portugal was still standing firm on 2004,” Akers-Jones wrote.
But he noted that the Chinese government wanted the return to be no later than 2000, when the Sino-British Joint Liaison Group would cease to operate: “[China] saying it would be very difficult to explain 2004 to the British when they had been so insistent on 1997.”
The Sino–Portuguese Joint Declaration was signed in April 1987 after four rounds of negotiations starting in late June 1986.
The records are part of a set of Foreign and Commonwealth Office documents declassified in January and April this year. They are available to the public at the National Archives in Kew, London. The 2004 date may have been proposed only in the latter half of 1986, according to the documents.
In a document dated January 6, 1986, a Foreign and Commonwealth Office official cited a China Daily report four days prior, which said a Chinese foreign ministry spokesman described media reports of a Handover of Macau in 2002 or 2004 as “totally groundless.” The spokesman also said any suggestion of Macau returning after 2000 would be unacceptable. A week later, the official was part of a group who visited Octávio Neto Valério, then-Portuguese ambassador to China. Valério said there were reports saying the Handover may occur in 2003, 2004 or 2007 – all linked to historical anniversaries – but such dates had never been advanced by members of the Portuguese government at the time.
Portuguese views
Camões Chi-keung Tam, an expert on Macau’s Handover who covered the events as a journalist and wrote his PhD thesis on the topic, told HKFP that Portugal only raised the possibility of a 2007 Handover, since it would be the 450th anniversary of Portugal renting Macau. Tam, now an assistant professor at the Faculty of Humanities and Arts of the Macau University of Science and Technology, questioned the sources cited by Akers-Jones and Tsang. “From [the 1986 negotiations] to 1987 when the agreement was signed, information from Macau was sealed off… this declassified information may not be valuable, since it is not first hand information,” he said.
He said the US Consulate-General staff members in Hong Kong did not know Cantonese and Portuguese, thus they may have received incorrect information: “Donald Tsang likely cited sources incorrectly, and Akers-Jones may have heard wrongly.” Tam said China hoped to take back Macau by 1997, but the Portuguese refused to return Macau in the same year of Hong Kong’s Handover from Britain. “Portugal said they have never invaded China, they paid an annual rent of 500 taels of silver, they tried to return Macau two times but were not accepted… They would have rather handed Macau back immediately in 1985 when negotiations started, and it scared off the Chinese side,” he said. After the democratic revolution in Portugal in 1974, its government tried to return Macau in 1975 and 1977.
‘Hopeless fantasy’
Meanwhile, a document written by John Boyd, Hong Kong government’s political adviser at the time, also shed light on the role of the Portuguese in the negotiations.
He was having dinner with Sir Roger Lobo, a Hong Kong-Macanese lawmaker, on October 7, 1986. “[Lobo said] They had a hopeless fantasy that they could ‘play the cultural card’ – i.e. that statements or demonstrations of what Portuguese culture had in the past brought to the South China would impress the Chinese. If they persisted in this line they would get two fingers from Peking.”
“Equally, they had a fantasy that they could suddenly maximise the value of Macau to China by installing such infrastructural items as an airport. There was no money for such schemes; and no requirement, given that the Chinese could do their own thing across the border at much lower cost.” “He did not exclude absolutely that the Portuguese would lose patience and leave before the end of the transitional period, when agreed.”
Publicada por João Botas à(s) 10:28