Edited version (by Henry d'Assumpcao) of an article published in the Casa Down Under  - Áustrália - Newsletter, vol 20 Issue 4, Sept 2008 by Stuart Braga﻿.

A  grande calamidade. So begins the report of the session of the Leal Senado (the Macau Council) of 29 September 1874, quoted by the prolific Macau historian, Father Manuel Teixeira 1. Writing in 1974 on the centenary of the typhoon, Teixeira described it as the most destructive ever experienced in the history of Macau. As cyclones are to Northern Australia and hurricanes to the southern United States, so typhoons are to the South China Coast. Over the centuries they have brought death and disaster on a huge scale. The horroroso tufão of 1738 was the greatest disaster to have befallen Macau up to that time. About a century later, two typhoons created havoc only a year apart, in 1847 and 1848. By 1847, meteorological records had commenced, and the mercury dropped to 745 mm. The following July, another grande e violento tufão swept the coast of South China.
Macau had already suffered substantial loss of population with large numbers leaving for Hong Kong, occupied by Britain since 1842. Typhoons grew worse, with more buffeting in the next 25 years from typhoons which took barometric readings in Macau down to 726mm in 1862 and 717mm in 1871. Hong Kong was relatively protected from the worst violence of typhoons because of its sheltered harbour. However Macau faced the full force of a typhoon sweeping in from the South China Sea. A scientific journal in 1874 observed, 'Macau fares worst, for it is situated precisely where the typhoon is arrested by the high land of the coast.'2. The article went on to point out that the typhoon had crossed from Hong Kong to Macau in half the time taken by the typhoon of 1871. The low point of the barometer occurred in Hong Kong at 2.15am and in Macau at 3.15am In 1871 the typhoon had taken more than two hours to reach Macau from Hong Kong. So Macau was hit in 1874 twice as fast and even harder than it had been three years earlier.
﻿

﻿On this occasion, the barometer in Macau dropped to 709mm, the lowest pressure ever recorded at that time in China2. While Hong Kong endured a terrific battering, Macau was almost obliterated. C.A. Montalto de Jesus, then a boy of eleven living in nearby Hong Kong, wrote about it a quarter of a century later.3 'As if nature too were bent on the downfall of Macao, a terrific typhoon, its very centre, swept over the ill-fated colony on the memorable 22nd of September 1874; and a fateful shift of the wind from north to east, at the equinoctial spring tide doomed the fairest part of the city to the full havoc of cyclonic blasts and waves. Battered, flooded, Macao was at the same time assailed by pirates.' 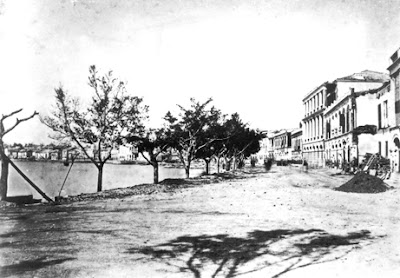 Fires broke out throughout the city, possibly lit by arsonists intent on forcing people to flee from their houses so that they might be looted more easily. Montalto de Jesus went on, 'the lurid glare revealed many an imminent peril in that night of unspeakable horror and tribulation.'
The official report, dated 23 October 1874, lists street by street Chinese houses lost. They totalled 1,1724. Between 4,000 and 5,000 people died and 2,000 fishing and trading craft were lost. On Taipa more than 1,000 bodies were found and another 500 on Coloane, chiefly of fishermen. The value of houses, goods and ships lost came to roughly $2 million, a vast sum at that time3. 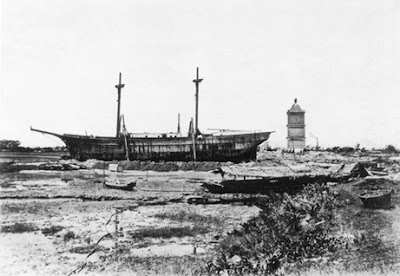 The brig Concordia, high but not exactly dry, in a paddy field near Ilha Verde, MacauThe dead were buried in a new cemetery opened for the purpose on Taipa. So great was the devastation that there was speculation that an earthquake probably occurred at the same time as the typhoon.5.
In those days there were no weather forecasts or typhoon warnings. These came later, and the old typhoon signals – 10 large black geometric shapes – are still housed on Guia. They used to be hoisted on a mast when a typhoon threatened, but this elementary system has long since been replaced by radio, television and the Internet. So this typhoon struck very quickly and without warning. Augusto Nolasco told Graciete Batalha something of what happened. On 22 September 1874, 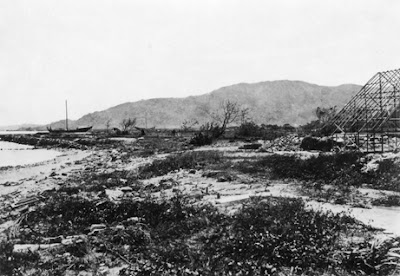 'It was a very hot and still night and people were out in the Praia Grande in search of a little fresh air. A full moon … filled the night sky. As people began to make their way home, it started to rain heavily and a strong wind started up. Everyone firmly secured and locked their doors and windows … Never had there been such a strong typhoon. The sea level rose so high that a lorcha [a light vessel with a European hull, and the rigging of a Chinese junk] was washed up close to the cathedral.' 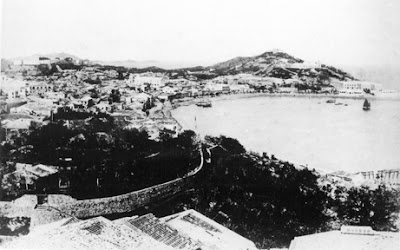 Another view of Praya Grande with Guia in the background

Things grew worse. 'Roofs were blown off and houses collapsed and a great fire swept through Santo Antonio.' Nolasco went on to recount the story of an old couple whose house was unroofed, and as they fled to the church seeking sanctuary, were robbed by pirates. Next morning they found their house destroyed by fire. They ended their days destitute.6
Most of the 2,000 vessels lost were fishing craft, and the Chinese boat people were all but wiped out. Larger vessels were lost too. A Portuguese gunboat, Principe Carlos, was landed in a paddy field 14 miles away to the south3, and Teixeira7 names three other ships that were driven ashore or suffered damage in the Porto Interior.
The loss of ships in Hong Kong was greater than that in Macau, because the commerce of Macau had diminished during the previous thirty years. The London newspaper The Times reported on 30 September that five ships had been sunk, six were missing, three had run aground and another nine dismasted. (30 September 1874). A week later on 5 October the paper printed another long list of vessels damaged which had struggled back to Hong Kong harbour for repairs. It is interesting to note that the British papers reported only the loss of shipping. There is no mention of loss of lives or property. The British were concerned only with commerce. 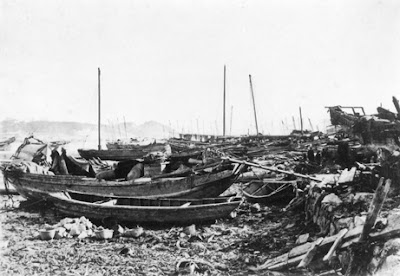 Montalto de Jesus went on, 'the disastrous typhoon consummated the ruin of the Macanese'3. In the next two years, the Catholic population of Hong Kong increased from 4,520 to 5,250. It is likely that much of this increase, of 730 people or 15%, is the result of an influx of refugees from the stricken Portuguese colony. The enrolment of St Joseph's College, Hong Kong, increased greatly for the same reason. However, whereas the earlier Portuguese immigration of the 1840s was readily absorbed by the rapidly growing Hong Kong, this large influx could not readily be accommodated and they became for many years an underclass. This led to social tensions discussed at some length by the fiery young J.P. Braga, who in 1895 wrote a hard-hitting pamphlet against the injustices experienced by the Portuguese community: The rights of aliens in Hongkong. It was the beginning of a long and distinguished public career. 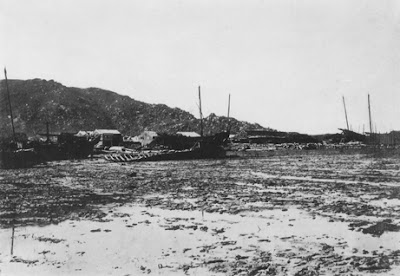 Destruction of junks
In Macau there was a detailed report on damage to churches and public buildings. The Bishop's Palace was largely destroyed and church archives were lost. The churches of São Lázaro, Santo Agostinho, São Domingos and Santo António all suffered heavy damage, particularly Santo António which was severely damaged by fire. The cathedral too suffered major structural damage.8
When the Leal Senado spoke of 'a great calamity', they didn't know the half of it. Hong Kong recovered fairly quickly, but it took Macau many decades. The economy was already in a poor state, and with the exodus of population, things grew worse. Montalto de Jesus mournfully quoted a pessimistic prediction made soon after Hong Kong was set up in 1842: that Macau would become a bare rock where fishermen spread their nets to dry.3 It would be more than a hundred years before prosperity returned to Macau, longer still before today's casinos brought vast wealth. 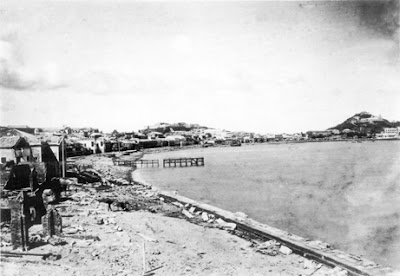 Another view of Praya Grande
Nevertheless, Macau would fulfil a vital role between 1942 and 1945 when more than 10,000 British and American people flocked there during World War II, as a calamity far greater than any typhoon overtook Hong Kong – the Japanese Occupation. If Macau had not been there for these refugees, their situation would have been unimaginably desperate. Macau, abandoned by the British for a century, generously gave them relief and safety in their time of need.
References:
1 Padre Manuel Teixeira, O Maior Tufão de Macau, p38
2 Nature, 31 December 1874, p169
3 C.A. Montalto de Jesus Historic Macao, 2nd ed., Oxford University Press, 1984 p423
4 >Padre Manuel Teixeira, ibid, p. 34)
5 Nature, ibid, p168
6 The letter is held by the Lisbon Geography Society. A.M. Amaro, The 1874 typhoon: a Story, Macau (magazine), 1997, pp140-1
7 Padre Manuel Teixeira, ibid, p17
8 Padre Manuel Teixeira, ibid, pp26-28, 42
A note on sources:
The Macau Collection Room of the Macau Central Library, Av. Conselheiro Ferreira de Almeida, contains all the local sources used. I am grateful to Marie Imelda MacLeod, Directora do Arquivo Histórico, for her assistance in locating printed and photographic sources there. Other printed sources are in the National Library of Australia, notably the JM Braga Collection. I appreciate also the efforts made by António M. Jorge da Silva in enhancing the photographs.
Informações adicionais em português neste post: http://macauantigo.blogspot.com/2009/04/tufao-em-1874.html
Publicada por João Botas à(s) 08:39