Inside Passage to Macao

Na sequência do último post aqui fica o registo - in loco - detalhado de como era a viagem entre Macau e Cantão nos primeiros anos de 1800...
Going to Macao from Canton on the route used by the ships is prohibited and no one goes by it except in a ship private sail boat or native boats used expressly for this unlawful mode of travelling. The price demanded for taking a foreigner from Whampoa to Macao or from Macao to Whampoa varies from twenty to forty dollars.
The inner passage as it is called is the one appointed for boats which carry foreigners down to Macao by a passport or travelling license. In order to go in this manner application is made through a linguist two days previous to the time of departure to the department from whence the passports are obtained. A single boat is hired for about forty dollars which includes every expense and gives a privilege to as many as can be conveniently accommodated of going in it thus making the expense light when distributed among several. A commodious cabin with a raised platform around it covered with mats to sit and sleep upon a centre table and other conveniences render these boats very agreeable to travel in the servants cook and boatmen living on deck and not at all interfering with the passengers. In the narrow passages and in adverse winds or calms the boats are tracked by the crew who run along the shore harnessed to a line which is attached to the mast head while the course is governed by the helmsman with a broad and powerful rudder. To a stranger this mode of travelling is novel and interesting the shores abound with objects of curiosity or in beautiful scenery and it is only as he approaches the sea that the country begins to assume a less inviting appearance the hills being generally very high and either barren or covered with pines. The boat is detained at the town of Hong shan for the indorsement of the passport and inspection of the boat by the officers. 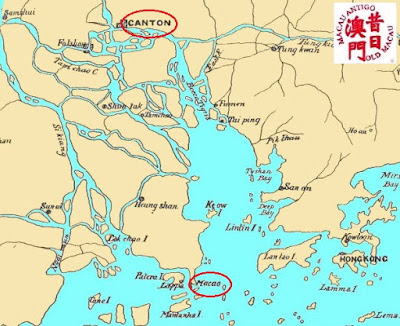 This town derives its chief importance from being the place of rendezvous for the numerous boats employed in the fisheries at the mouth of the river. The repairs and fittings out are conducted here and employment thus given to a considerable population.
During the period when the ladrones or pirates were most formidable they committed many acts of violence near this place and as a protection against them a number of piles were driven across the channel for the purpose of preventing the passage of their vessels. A small portion of the channel was left open but guarded by an iron chain. The remains of this defence still remain although in a ruinous condition the cause of alarm not having recurred for many years.
There is a regulation here that if a boat having foreigners on board arrives after sunset it must remain at anchor until the next morning as no officer will come off to examine it after dusk. It is also required of the European passengers to sign their names on the passport but ridiculous or fictitious names are generally substitutedas the Chinese officers are quite ignorant of any language but their own and depart with the autograph of Julius Cæsar or Napoleon to say nothing of others more absurd quite unconscious of the joke which is practised on them Sometimes just before reaching Macao in a part of the channel called the Broadway a war junk is found at anchor and the captain of the boat is obliged to board in order to show his permission to proceed.
No further stoppage occurs during the passage. The distance is difficult to estimate correctly owing to the very numerous bends in the river but it cannot be much less than an hundred and twenty miles Many pagodas are observed on the hills differing from those on the outside channel in having but seven stories while those at Whampoa Second bar & all have nine. Much less insolence and abuse is experienced from the country people than in the neighbourhood of Canton and it is probable that many civilities would be freely offered were it not for the fear the people entertain of the native magistrates who seize upon any demonstrations of kindness to the foreign devils as good grounds to accuse them of disaffection and treasons able intentions! (...)
in  Sketches of China, de W. W. Wood, 1830
PS: sobre este autor e o livro referido darei conta de mais detalhes em futuros posts.
Publicada por João Botas à(s) 15:38