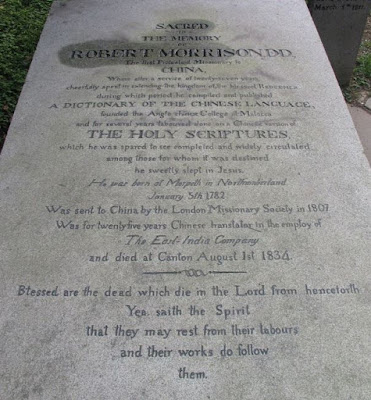 SACRED
to
THE MEMORY
of
ROBERT MORRISON, DD
The first Protestant missionary to
CHINA
Where after a service of twenty-seven years
cheerfully spent in extending the kingdom of the blessed Redeemer
during which period he compiled and published
A DICTIONARY OF THE CHINESE LANGUAGE
founded the Anglo Chinese College at Malacca
and for several years laboured alone on a Chinese version of
THE HOLY SCRIPTURES
which he was spared to see complete and widely circulated
among those for whom it was destined
he sweetly slept in Jesus.
He was born at Morpeth in Northumberland
January 5th 1782
Was sent to China by the London Missionary Society in 1807
Was for twenty five years Chinese translator in the employ of
The East India Company
and died in Canton August 1st 1834
Blessed are the dead which die in the Lord from henceforth
Yea saith the Spirit
that they may rest from their labours
and their works do follow
them
Ao lado do túmulo de Robert Morrison no Cemitério Protestante de Macau está uma lápide com inscrições em chinês que data de 1934, o centésimo aniversário na morte de Morrison, mandada fazer pela Chinese Christian Church of Guangdong Association e onde pode ler-se: 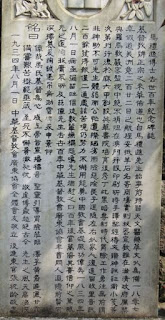 "We erect this stone on the one hundredth anniversary of the passing of Mr. Morrison. From all the members of the Chinese Christian Church of Guang-Dong Association, in remembrance of a past giant, to express our highest admiration and sincerest, humble sadness and to express our eternal gratitude.
The great Mr. Morrison had a Christ-centered heart. Through the will of God he spread the Gospel. By the guidance of the Holy Spirit he went through dangers to arrive at his destination. Through him came many blessings to the Chinese people like the rains are to the ground. In suffering and trails he remained firm. He never gave up and was always dedicated. Great is his humbleness beyond any past generations. The memory of him will last in eternity.
1934 August 1st Epitaph respectfully made by all the members of the Chinese Christian Church of Guangdong Association. Your humbleness Pastor Zhang Zhu-Ling wrote with respect." 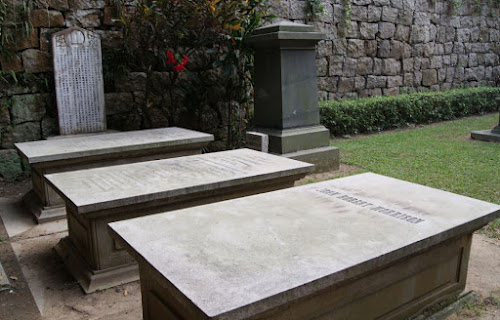