The town of Macao, where the Portuguese, in advance of all Western nations, obtained a foothold in China, lies upon the southern side of the bay. It has lost commercial importance, and is now a seaside resort for the Europeans of Hong Kong. A steamer owned by an American gentleman plies between that port and Canton. It makes its appearance from among the small islands, and follows in our wake up the bay.
It is fifty miles from Hong Kong to the Bogue forts. They are in ruins now, the shattered blocks of granite lying just as they were left at the close of the bombardment in 1856. The grass is springing fresh and green where the mandarins once marshalled their soldiers. The scenery here is charming; no high mountains, but a succession of hills, which, combined with the water views, make it a locality of rare beauty. Thus far we have been sailing northerly, but now turn toward the west, with the river deep enough for the largest ship to reach Whampoa, the port of Canton. (...) 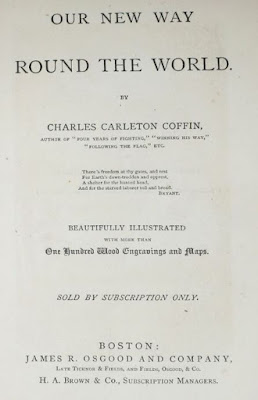 Macao formerly had extensive dealings with Canton, but the Portuguese, who reside there, have lost their ancient vigor. It is a decaying town, beautifully situated on a peninsula, presenting a noble front to the harbor.


The location is superior in every respect to that of Hong Kong. The harbor is sheltered from the sea, and spacious and deep enough for the largest vessels; the climate is salubrious; the buildings plain solid structures, less imposing than those of Hong Kong. Aside from the beauty of the place, there is very little to interest a visitor at Macao. It has had its day, and, like Portugal, has gone to sleep. Its trade now is insignificant compared with that of former years, when it was the only port on the South China coast. It is now the place from which nearly all the coolies are exported. The Portuguese take more readily to dealing in human flesh and blood than any other nation. Formerly they dealt in slaves, but now in coolies. The Chinese government has interdicted the trade, but Portugal, holding Macao, can carry it on in defiance of Pekin, just as England can the opium traffic.
It may be asked how the coolies can be obtained in violation of law. The answer will show the weakness of the Imperial government. Here in the provinces of Kwangton and Kwangsi, especially in the southern portions bordering on Tonquin, there is very little governmental power; the people are divided into clans, and are subject to chiefs, between whom there are frequent wars. The prisoners taken are brought to Macao and sold to the Portuguese by half-castes, who are travelling through the country continually stirring up strife. 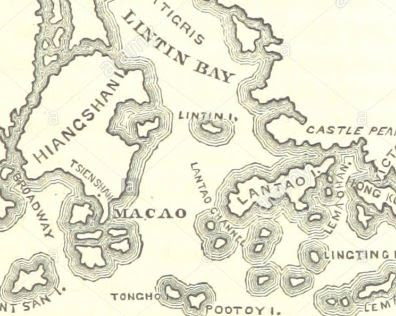 In addition to thus promany are those cured kidnapped. The coast swarms with pirates. Some now in sight quite likely are of this character. They purchase their cannon of English merchants at Hong Kong, sail along the coast, attack and plunder other craft, bring the crews to some out - of - the - way place, and sell them a coolt to cooly-traders, the whole proceeding being winked at by the government of Macao, which rests itself on an "Emigration Act" regulating the traffic. Another source of supply is from the gambling-houses.
The Chinese are such inveterate gamesters that, when their money is gone, they stake themselves. It is the custom of the Chinese to pledge their bodies whenever they have no other security to offer their creditors. There are "crimps" in the employ of the cooly-dealers, who frequent the gambling-hells of the interior towns, ready to advance a trifle of money to the gamblers on their bodies; when they have lost themselves by play, they are brought to Macao, threatened by the crimp with death if they do not give proper answers to the "commissioner." (...)
They go into the barracoon, from the barracoon to the vessel; are taken to Cuba or Peru, or some other place, to all intents and purposes slaves. Including head-money, they cost from twenty-five to thirty dollars apiece. The barracoon keeper or dealer doubles his money, selling them to the shipper for sixty or seventy dollars. Insurance, passage, and other ex- penses bring their cost to about two hundred dollars at Havana, where these emigrants are sold for eight years' service at about three hundred and fifty dollars. Nearly fifteen thousand a year are shipped, and the trade is increasing.
The Governor of Macao is appointed by the king of Portugal, and has a salary of $3,750. There is also a judge and a bishop, each having a salary of 8 2,300. All laws are made by the senate, consisting of three persons, who are elected by the people. Suffrage is universal, that is, for Portuguese residents. If a person wishes to lead a lazy, careless, good-for- nothing life, Macao is the place for him. The inhabitants are in no hurry or worry about business; provisions are cheap, the climate mild, the heat of summer tempered by the monsoon; the atmosphere conducive to indolence. Society imposes no restraints in regard to morality; there is no necessity for troubling the priest to pronounce the marriage vow; they only ask for absolution when death steals on apace. 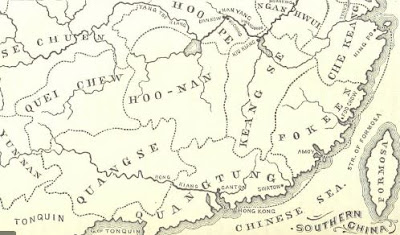