Facade of the Great Temple, Macao 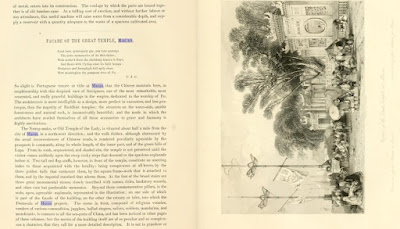 Look how, grotesquely gay, yon fane portrays
The antic mummeries of its idol-shrine;
With antler'd front the shrinking heaven it frays,
And flouts with Cyclop stare its light benign:
Sculpture and hieroglyph full aptly show
How meaningless the pompous rites of Fo.
C. J. C. 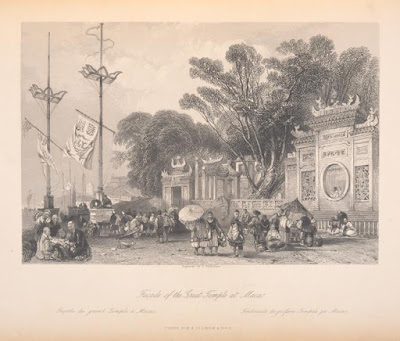 "So slight is Portuguese tenure or title at Macao, that the Chinese maintain here, in neighbourship with this despised race of foreigners, one of the most remarkable, most venerated, and really graceful buildings in the empire, dedicated to the worship of Fo.
The architecture is more intelligible as a design, more perfect in execution, and less grotesque, than the majority of Buddhist temples; the situation on the water-side, amidst forest-trees and natural rock, is inconceivably beautiful; and the mode in which the architects have availed themselves of all these accessories to grace and harmony is highly meritorious.
The Neang-mako, or Old Temple of the Lady, is situated about half a mile from the city of Macao, in a north-west direction; and the walk thither, although obstructed by the usual inconveniences of Chinese roads, is rendered peculiarly agreeable by the prospects it commands, along its whole length, of the inner port, and of the green hills of Lapa. From its sunk, sequestered, and shaded site, the temple is not perceived until the visitor comes suddenly upon the steep rocky steps that descend to the spacious esplanade before it.
Two tall red flag-staffs, however, in front of the temple, constitute an unerring index to those acquainted with the locality ; being conspicuous at all hours, by the three golden balls that surmount them, by the square frame-work that is attached to them, and by the imperial standard that adorns them. At the foot of the broad stairs are three great monumental stones, closely inscribed with names, titles, laudatory records, and other vain but pardonable mementos. Beyond these commemorative pillars, is the wide, open, agreeable esplanade, represented in the illustration; on one side of which is part of the facade of the building, on the other the estuary or inlet, into which the Peninsula of Macao projects. The scene in front, composed of religious votaries, venders of various commodities, jugglers, ballad singers, sailors, soldiers, mandarins, and mendicants, is common to all the sea-ports of China, and has been noticed in other pages of these volumes; but the merits of the building itself are of so peculiar and so conspicuous a character, that they call for a more detailed description. It is not to grandeur or loftiness, that the Neang-mako owes its charms, but to multitudinous details, made out with a minuteness and accuracy that cannot be exceeded.
There is not another example, most probably, in all this wide-extended empire, in which the many grotesque features of Chinese scenery are concentrated within so small a compass; buildings, rocks, trees growing from the very stone, would appear to justify the artificial combinations that are made in their gardening, and seen in their drawings. An enclosure, resembling the holy ground that surrounds the ancient sanctuaries of Europe, is formed by means of walls connecting the rude rocks that occur in the circuit, and which arc always religiously retained by Chinese architects and decorators. A balustrade, resting on this dwarf wall, is divided into compartments, enriched by tracery, and decorated with various representations of instruments of music, implements of art, and weapons of war. A continuous design fills one of the subdivisions; it is a tale readily told. A child, seated on a quadruped of a non-descript species, is attended by venerable men, and followed by two females carrying umbrellas; while Satan, adorned with monstrous horns, is fleeing from the party in the utmost dismay. Another division is filled with a group representing the dedication of the temple, and the votive act in which it had its foundation. The design of the whole facade includes five separate structures, the central more lofty, the lateral gradually descending from it, and differing also in character and decorations.
A rich cornice supports a highly-ornamented roof entirely of porcelain, on which rests a boat or junk, sculptured with representations of various national scenes and customs. Beneath the cornice are two oblong panels, enclosed in frames of a bright red stone, the higher containing basreliefs of grotesque figures, and extraordinary combinations; the lower filled with apophthegms, from the writings of the great founder of the sect of idolaters that come here to worship. Beneath this latter tablet, opens a large circular window, the frame of which appears to have been cut, with incalculable labour, from a single block of stone.
Pilasters, wholly covered with inscriptions, separate the central from the two lower divisions; these are also adorned with porcelain roofs, Chinese boats, massive cornices, and indented with tablets on which admonitions and wise maxims are emblazoned. Each division is pierced by a square window of large dimensions, the carvings in which, although an extraordinary evidence of untiring labour, of unexampled perseverance, are neither beautiful nor intelligible. Probably the object of the architect who designed them, was to establish the superiority of industry, patience, and perseverance, over uncultivated genius. Whether he has succeeded in this expectation, may be reasonably doubted; but it is morally certain, that he has left a monument of his art behind, which few will possess the courage, and fewer the desire, to imitate."
Publicada por João Botas à(s) 09:47