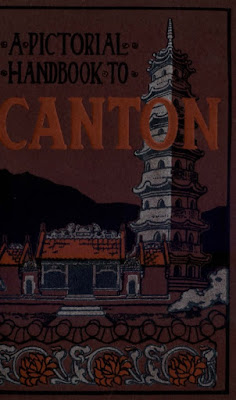 Editado em 1905 em Inglaterra este "A Pictorial Handbook to Canton" é escrito em jeito de guia turístico para os que pretendem visitar Cantão durante um ou dois dias. O autor não é identificado embora arrisque que muito provavelmente seja J. Arnold já que a maioria das 50 páginas incluem fotografias da sua autoria.
No prefácio pode ler-se:
"A Pictorial Handbook to Canton is intended to supply a short description of the most interesting places which a traveller, with one or two days at his disposal, can see in this oldtime city of South China. It is not in any way published as a brief history of the place, but with a view to furnish those desiring to make this enjoyable and interesting trip with information concerning sailings of steamers, guides, hotels, etc."
Na introdução destacam-se os motivos de atracção da cidade do Sul da China:
"The traveller visiting this part of the World and finding himself in this most interesting corner of the Rich Orient should have the special and particular object strongly fixed upon his mind, of visiting the City of Canton, where he should spend at least a couple of days. Canton is the great emporium for old curios, old embroideries, ivories, jadestone treasures, silks in every variety and the like, such as are not to be found in the same gorgeous display and at the same very moderate outlay in any other part of the World. Those who miss seeing Canton leave out the most important item in their Far Eastern programme; one that can never be substituted or replaced by seeing any other of the many Cities in the Empire." 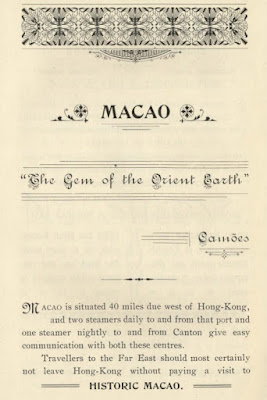 Embora seja sobretudo sobre Cantão, o livro inclui abundante informação sobre Macau, descrito como "The Gem of the Orient Earth" (...), "historique and picturesque Portuguese settlement" (...) full of interest to the tourist".
Eis um excerto:
"Macao The Gem of the orient Earth. Macao is situated 40 miles due west of Hong-Kong, and two steamers daily to and from that port and one steamer nightly to and from Canton give easy communication with both these centres. Travellers to the Far East should most certainly not leave Hong-Kong without paying a visit to this historic and picturesque Portuguese Settlement was founded in 1567, and will be found full of interest to the Tourist.
The approach to Macao is exceedingly beautiful and has often been spoken of as a modest replica of the Bay of Naples. Among the vanous places to be visited, are the Praia Grande, a beautiful semi-circular promenade on the sea front, with Fort San Francisco aud Public Gardens at the Eastern end and the ancient Fort Bomparto at the west end, and in the centre the "Macao Hotel" from whence the visitor is strongly advised, to obtain gtlides and rickshas to the various places of interest, mentioned below, and which should be taken in the order mentioned:
- The San Francisco Gardens.
- The Military Club.
- The Remains of the Old Wall originally surrounding Macao. 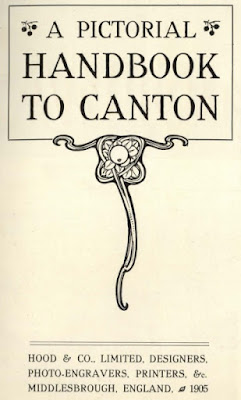 - The Avenida Vasco da Gama.
- The Roman Catholic Cemetary.
- The Guia Fort and Lighthouse. The first Lighthouse built in China. Permission to view this Fort and Lighthouse must however be previously obtaineed from the Colonial Secretary, so visitors are advised to write in advance to the Manager of the ''Macao Hotel" who will obtain the necessary permit for them.
- Lu Kau 's Gardens. Beautifully laid out and typically Chinese.
- The Flora Gardens.
- The Governor's Summer Palace.
- The Firecracker Factory
- The Montanha Russa Gardens.
- The Areia Preta Bathing Beach.
- The Porta do Cerco. An archway defining the boundary between Portuguese and Chinese territory.
- The Silk Spinning Factory. Where drawn-thread work and silk embroideries can be purchased.
- The Italian Convent
- The Old Protestant Church and Cemetary. Many prominent personages are buried in this Cemetary amongst others, D. Morrison, the first Protestant Missionary to China (...)
- The Grotto and Gardens of Camões. Where Luiz de Camoes, the epic Portuguese poet, was supposed to have written his celebrated poem "Os Lusiadas."
- The Facade of St. Paulo. This ancient church was built by the Jesuit Fathers assisted by Japanese Roman Catholic converts in l594-1602. It was burnt down in 1835 and only the imposing facade now remains. It is supposed to be connected by subterranean passages with the Guia Fort, the Monte Fort, the Bishop's residence at Green Island and with the sea. The outlet of a tunnel can still be seen on the sea road under the lighthouse.*
- The Cathedral of Se. Mass daily at 11 a.m.
- The Santa Casa da Misericordia. Where the Macao lottery is drawn every month.
- The Leal Senado (or Municipal Chambers).
- St. Domingos Church
- The Tobacco Factory.
- The Brass Factory. Beautiful specimens of beaten brass can be purchased here at moderate price.
- The Opium Farm. Where the raw opium is boiled refined and prepared especially for the American and Australian markets.
- St. Josephs College. One of the principal educational establishments in the Far East.
- The FanTan Gambling Saloons.
And numerous others places of interest of which full information can be obtained from the Manager of the ''Macao Hotel.'' Two or three days can well be spent in exploring the many interesting and picturesque spots in Historic Macao."
* é curiosa a indicação de túneis subterrâneos que ligariam as ruínas de S. Paulo ao monte da Guia, fortaleza do monte, residência do bispo na ilha Verde e o rio. Tanto quanto sei, os túneis existiram, mas apenas com ligações a zonas do Porto Interior. 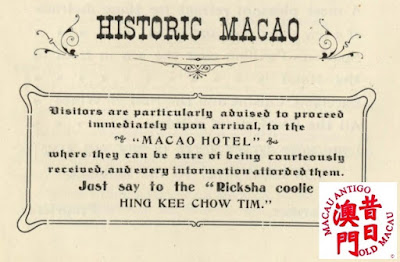 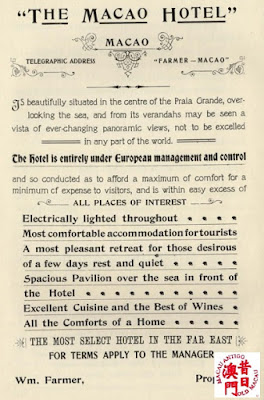 No anúncio (ao lado), o novo proprietário, W. Farmer, apresenta uma descrição minuciosa do espaço, destacando a localização, a esplanada com vista privilegiada sobre a baía da Praia Grande, o conforto, os preços acessíveis, a gastronomia e os vinhos do que é apelidado como "o melhor hotel do extremo-oriente".
"Is beautifully situated in the centre of the Praia Grande, overlooking the sea, and from its verandahs may be seen a vista of ever-changing panoramic views, not to be excelled - in any part of the world. The hotel is entirely under European management and control and so conducted as to afford a maximum of comfort for a minimum of expense to visitors, and is within easy excess of all places of interested.
Electrically lighted throughout; Most comfortable accommodation for tourists; A most pleasant retreat for those desirous of a few days rest and quiet; Spacious Pavilion over the sea in front of the Hotel; Excellent Cuisine and the Best of Wines; All the Comforts of a Home. (...)