The Portuguese Colony of Macao is situated on a rocky peninsula in the Heung Shan (Fragrant Hills) District in in the Kwong Chau Prefecture of the Kwong Tung, or Canton Province, in the south eastern part of the Empire of China. (...)
The whole peninsula on which Macao is built is about miles long from the extreme point which the steamers round on passing from the outer to the inner harbour to the long narrow isthmus of sand where Macao is joined to the Chinese empire and less than a mile in breadth and the circuit is said to be about 8 miles. On this peninsula are two principal ranges of hills running north and south and east and west respectively. They rise from 200 to 300 feet in height. Besides all the hilly portions which lend Huch a variety to the coup d'ceuti and throw up into prominence the public and private edifices crowning their heights or built on their sides, are numerous tracts of level land largely utilised for the erection of houses. Not only does the hilly nature of the peninsula give more variety to the scene; but the chance of a breeze is also enhanced bythe rising ground on which the rows of houses climb and detached residencies are perched. Several forts crown the different heights and churches as well as other public buildings are by no means wanting.
Many a picturesque view is to be obtained, the fine sweep of the the Praya Grande being universally admired. The streets are kept bautifully clean and the public and private buildings are often gaily coloured. (...)
One of the most enchanting scenes in Macao is that of this beautiful bay, quiet and graceful sweep of sea wall and rows of houses rising up the gentle slopes and the ancient forts and modern public buildings dotted here and there, while behind all rise the Mountains of Lappa and to the right those beyond the Barrier.
All descriptions are imperfect; some fail from an attempt to liken this beautiful little gem with another worldrenowned spot, the Bay of Naples. Let it be acknowledged at once that each is mi generis and attempt no comparison. There is no doubt when coming in from sea towards Naples and trying to detect Macao in Naples one does see a faint resemblence in one of the houserlad hills of the latter to Macao's central portion; but rather let one be content with enjoying the beauties of each and attempt no belittling of the grand proportions of the one or try to greaten the sweet gemlike curves and colour hof dear old Macao. (...)
Unfortunately the outer Harbour on which the Praya Grande faces is shallow and any large vessels which may call at Macao have to lie some miles from the shore in the offing. The Inner Harbour lying between the Peninsula and the Island of Lappa affords a secure harbour, but, unfortunately it has been silting up with mud for many years past. Of late years, however, a dredger has improved matters.
The Praya on the Inner Harbour presents a great contrast to the other Praya for whereas quiet reigns on the seaward one, the inland one is all bustle; rows of Chinese vessels are anchored off the shore and boats and sampans line the banks on which coolies are busy loading or unloading cargo to carry into the stores, shops, and wholesale Chinese merchants' places of business on this Menduia Praya or into the back streets.
Dyer Ball in "Macao The Holy City The Gem Of The Orient Earth", 1905 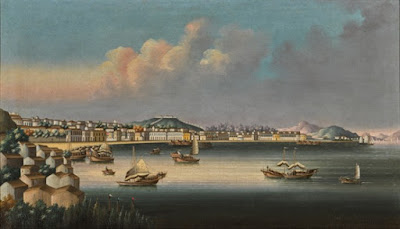 The Praya Grande (‘Large Bay’), also known as Nam Wan (‘South Bay’) in Chinese, is located on the eastern side of the Macau peninsula. Its distinctive curved shoreline and rows of European-style buildings made it one of the most popular port scenes in the genre of trade paintings. The scene above depicts the bay from south to north, with the Fortaleza do Monte at the center, St. Paul’s Church , the Palacio and the East India Company, with the Guia Fortress at the highest point on the right. Trading and fishing boats dock in the calm bay waters.