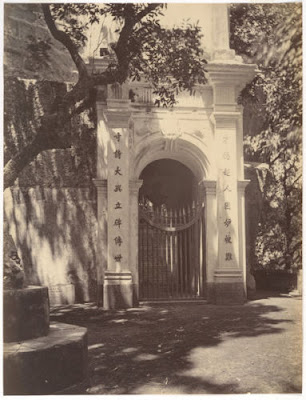 Macao is interesting as the only Portuguese settlement to be found on the coast of China. It may be reached by steamer either from Hongkong or Canton, and it is a favourite summer resort for the residents of our own little colony. In that pretty watering-place we may enjoy the cool sea-breezes, and almost fancy, when promenading the broad Praya Grande, as it sweeps round a bay truly picturesque, that we have been suddenly transported to some ancient continental town. Macao is a magnificent curiosity in its way. The Chinese say it has no right to be there at all ; that it is built on Chinese soil ; whereas the Portuguese, on their part, allege that the site was ceded to the King of Portugal in return for services rendered to the Government of China.
These services, however, cannot have been properly appreciated, for the Chinese in 1573, built a barrier-wall across the isthmus on which the town stands, to shut out the foreigners. The place has had a chequered history since the time of its original foundation, sometimes being under its own legitimate Government, and at others being claimed and ruled by the Chinese. But its history, however important to the parent country, had better be left alone, more especially as there are passages in it which reflect no great lustre on the nation whom Camoens adorned.
The main streets in Macao are deserted. The houses there are painted in a variety of strange colours, some of the windows being fringed with a rim of red, which gives them the look of inflamed eyes in the painted cheeks of the dwellings. But there are magnificent staircases, wide doorways and vast halls, though the inmates for the most part are a very diminutive race; they are called Portuguese, but they suffer by comparison with the more recent arrivals from the parent land, being darker than the Portuguese of Europe, and darker even than the native Chinese. There is trade going on the streets, but it is of a very languid kind, and the gambling-houses, or the cathedral are the chief places of resort. The forts are, of course, garrisoned with troops from Europe.
At 4 p.m. or thereabouts, the settlement wakes up; carriages whirl along the road; sedan chairs struggle shorewards, that their occupants may taste the sea-breeze; and the mid-day solitudes of the Praya Grande have been converted into a fashionable promenade. Ladies are there too, attired in the lightest costumes and the gayest colours; some of them pretty, but the majority sallow-faced and uninteresting, and decked out with ribbons and dresses, whose gaudy tints are so inhar- moniously contrasted, that one wonders how Chinnery the painter could have spent so many of his days among a com- munity so wanting in artistic tastes. The young men - for there seem to be no old men here, at least all dress alike, quite irrespective of years - are a slender race, but not more slender than diminutive. 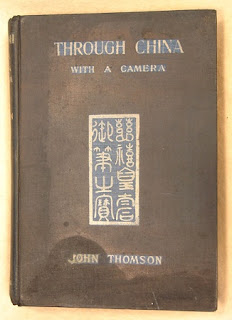 But if Macao is interesting as a Portuguese settlement, and the only one which now remains to Portugal of those which her early traders founded in China, it can also boast of historic associations, giving it a special and independent Approach to Buddhist Temple, Macao, attraction. Here the poet Camoens found a retreat, and here too, Chinnery produced a multitude of sketches and paintings, which have really had some influence on art in the south of China. (...)
Excerto do Livro Through China with a Camera (1898), John Thomson
John Thomson (1837-1921) fez a sua primeira visita à China entre 1868 e 1872 registando a vida e os costumes locais através da fotografia. Visitou Macau, Hong Kong, Guangzhou, Shantou, Fuzhou, Xiamen, Taiwan, Shanghai, Ningbo, Nanjing, Sichuan, Tianjin, Beijing e Pequim, entre outros locais.