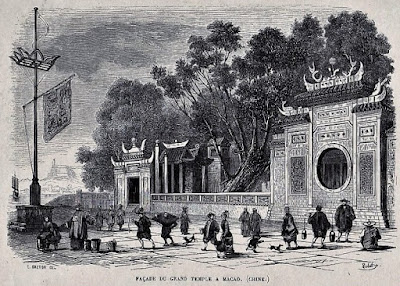 Borget
Born into a well-to-do family in Issoudun, Auguste Borget forsook a career in banking to study art. He attended the atelier of Jean-Antoine Gudin in Paris, and became a close friend of Honoré de Balzac, with whom he shared na apartment. In October 1836 Borget embarked on a tour westwards around the world, sketching as he went; in the course of this journey he spent over ten months on the China coast in 1838-9. His Chinese scenes were
published as lithographs with accompanying text in La Chine etles Chinois (1842).
Watson
The Scottish-born Thomas Boswall Watson came to Macau as a physician in 1846; he moved on to Hong Kong in 1856, and returned to Britain in 1859. In Macau he became the friend, doctor and pupil of George Chinnery during the artist’s last years. He was himself a capable amateur artist, and some (although by no means all) of his drawings are evidently inspired by Chinnery’s work. Watson acquired a number of drawings by Chinnery, some of which - it has been speculated - were given to him in lieu of medical fees.
Chinnery
English painter, active for almost all his career in the Eastern world. After leaving London in 1802 he worked in India until 1825 and then for the rest of his life in Macao, from which he made visits to Canton and Hong Kong. He made his living principally as a portraitist, but his reputation now rests mainly on the pictures of Indian and Oriental life and scenery that he made for his own pleasure.