Memories of my father

First held on 30th and 31st of October, 1954 as a club race for local motoring enthusiasts, the Macau Grand Prix has evolved into what many believe is on of the finest street circuit race meets in the world. Well known local motor enthusiast of the day and skilled car mechanic, Eddie Carvalho was one of 15 entrants to compete in a four-hour race over 51 laps of the 3.9 mile Guia circuit, and with his Triumph TR2 he took victor’s laurels in this inaugural event.
Fifty-eight years on, fond memories remain of the man who helped put street circuit racing – and Macau – on the world map. Now in her 70s, Maria Fernanda (Nana) Cabral de Carvalho Barros is Eddie Carvalho’s second child. Born in Lisbon, Nana grew up in Hong Kong and Macau, together with her elder sister Nina. She still has vivid memories of that time and of her beloved father. “Our father gave us a lot of freedom to explore the myriad of little streets on our bicycles, to go fishing in the reservoir with our homemade bamboo rods, and to play with our close friends and classmates the Lei Tao sisters, who were cousins-in-law with Stanley Ho”, remembers Nana. Eddie was born and raised in Hong Kong, coming from a line of well-respected financiers of the day. His father had been Chief Clerk in Hong Kong, the most senior government position of the non-British community, and he owned a sizeable property on May Road. His grandfather was Chief Cashier for the Hong Kong Treasury.
Eddie’s father had firm ideas that his son and heir would follow in his footsteps and continue the family tradition of working in finance. He sent Eddie to London to learn to be an accountant. But the young man’s heart lay elsewhere. Uninterested in his studies he pursued his passion for music and sports. By the time Eddie was 16, both his parents had passed away and having inherited the family fortune, he abandoned school and moved to Portugal where he lived a playboy life of horse riding, music and fast cars.
Clearly a man of talent, action and enthusiasm, he threw his energies into a wide range of interests. He was an accomplished musician, playing trumpet in a weekend band, and he was on the reserve list for the Portuguese equestrian team for the 1928 Olympics. It was in Europe that he got bitten by the car rally driving bug. A totally self-taught and skilled motor mechanic, when he returned to Hong Kong he became a member of the Motor Sports Club and joined Gilmans, one of the ‘Hongs’ or major companies in Hong Kong, becoming service manager for their motor services division, then general manager for Far East Motors. A few years later he opened the United Far East Motors.
For clients with expensive beautiful classic cars that needed specialist repairs – among them numerous Cathay pilots with their ‘souped up’ cars – Eddie was ‘The Man’.
(In fact my father, British army officer Brian Watkinson had a much-loved Morgan and he and Eddie became firm friends as Eddie helped keep the temperamental machine road worthy!)
In Hong Kong, Eddie’s talent for riding enabled him to be an amateur jockey, riding for friends such as Marcus de Silva, owner of ‘Crown Witness’ and ‘Hostile Witness’. (Marcus da Silva was the father Archie de Silva - the owner of the world-famous racehorse in Hong Kong ‘Silent Witness’.) 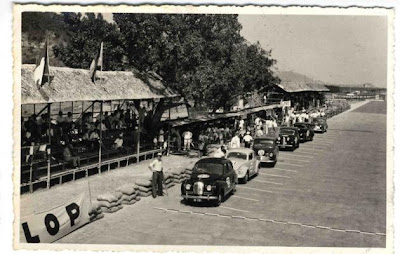 For the first few years of WWI, Eddie and his family stayed on in Hong Kong, and true to his adventurous spirit, he became involved in espionage. “Dad had a shoe-making business in the top floor of our house but this business was a cover for sending messages between Hong Kong and Macau” Nana says. Little notes passed between the two territories in the soles of patron’s shoes. When the Japanese got wind of this, the whole family took flight by boat to Macau one night. Nana still speaks of this experience with wide-eyed excitement mixed with terror.
“We could hear the airplanes in the distance and then the screaming sound of the bombing as the Americans destroyed fuel stores to prevent the Japanese from using them”.
No doubt a challenging time for Eddie and his wife, the war years spent in Macau were however the happiest time for Nana and her sister. Macau was neutral, and unlike Hong Kong where the Japanese occupation was oppressive, life in Macau was comparatively care-free. The two sisters felt safe and as long as they were always together. Nonetheless, Nana remembers her father as being very strict but also fair. He came from the school of ‘eat what is put in front of you’. “Once, when I left an escargot on my plate, Dad made me eat escargots every day for the rest of the week!” she recalls.
Quick-tempered and intolerant of silliness, Eddie did not suffer fools. But he had a special magic that drew young people approaching adulthood to him for guidance and advice. Through coaching a local softball team, Eddie became a mentor to many. 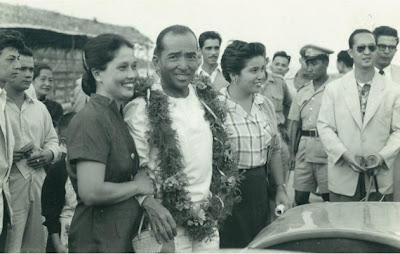 And what does Nana remember of the big day when her father won the first Macau Grand Prix? This of course was back in the day when the Praia Grande stretched in a wide arc from the old Macau Law Court building (opposite today’s New Yaohan department store) past the Clube Militar to the old Lisboa. The starting grid was located where it is today by the reservoir, but the refreshments left much to be desired. “It was all rather primitive compared to the luxuries of today’s Grand Stand tents. There was no food, we had to bring our own sandwiches!” says Nana. The races were in smaller groups of cars between 10-20 – and there was even a ladies race with soft-top convertibles. 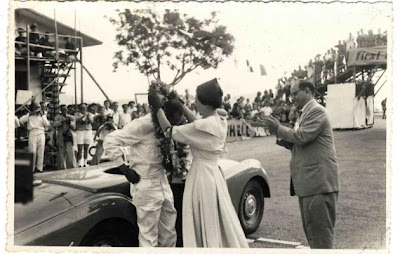 “Sadly Dad wouldn’t let me compete in the Ladies’ Race but he was delighted when a Portuguese lady, my friend Maria Fernandes Ribeiro won the first Ladies’ Race; it was very exciting!” Eventually Eddie left Asia to work as a service manager of a big garage in Sydney. He retired and in his mid-70s had a stroke. He died a happy man content in his achievements and having always lived life to the full. Nana married her childhood friend and fellow Portuguese Henry “Quito” Barros in Hong Kong in 1963, and they will be celebrating their 50th Anniversary next year. Splitting their time between Hong Kong and Sydney, they have one son, Rick and are proud grandparents to 2-year old Charlie.
Article by Suzanne Watkinson published in MacauCloser Nov. 2012
B&W photos courtesy of Macau Grand Prix Museum 圖：澳門大賽車博物館
Publicada por João Botas à(s) 00:40