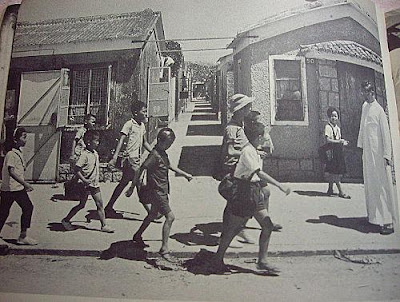 Macao has always been a safe harbour for Asian populations. From the time the territory became a commercial hub until today there have been countless communities that have arrived fleeing from wars or in search of a better life. The ones that are most mentioned in local history are the Portuguese from Shanghai and the Vietnamese, who found a gateway to a happier future in Father Lancelote Miguel Rodrigues. The true life story of Father Lancelote Miguel Rodrigues started with the arrival of the first Portuguese refugees from Shanghai to Macao in 1948. Mao Zedong army were about to take control of the Chinese city and people were fearful of what might happen.
That year a young Lancelot was studying at the Macao Seminary, having arrived from his native Malacca (Malaysia). Since 1941 he had heard of people who were leaving Shanghai to return to Macao due to the war between nationalists and communists.As soon as they arrived in the territory they were sent to refugee camps set up at the Canidrome, at Rua do Gamboa and at Rua do Comércio. Lancelotes strong personality led the Bishop of Macao to delay his ordination and he sent him to the Canidrome to help with work to support the refugees.On 6 October, 1949 five days after the establishment of the People's Republic of China - he was finally ordained as a priest. He gave Mass for the first time in the chapel of the Canidrome. That same year the Bishop nominated him as chaplain of the Shanghai Portuguese refugees a position he held until 1965 and cooperating vicar of the Parish of Santo Antonio (St. Anthony). Later, between 1950 and 1951, he was put in charge of the Chapel of St. Cecilia; he was the interim parish priest of St. Anthonys Church, from October 1958 to October 1959, and deputy vicar from 7 September, 1966 to 26 November, 1966. However, serving the refugees was his main mission in life. 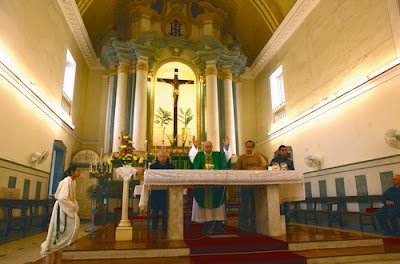 Shanghai Portuguese
The Portuguese refugees from Shanghai were descendents of Macao families that had left the territory in search of a better life. Many preferred to set themselves up in Hong Kong and Tianjin. Lancelote remembers those times: Outside Macao there were more job opportunities. In the 20s and 30s many boys from the Seminary, the Secondary School and the Commercial School managed to do well in Hong Kong. Some of them even got married and had children. But those that came from Portugal, either returned home after doing military service, or tried their luck in other places (United States, Canada and Australia), or opted to live in Macao.Many missionaries were also sent to China, to Malacca, to Timor and to Singapore, thus increasing the number of Portuguese spread throughout East Asia.When the Chinese Communist Party came to power in 1949, European descendents decided to leave China, with most Portuguese returning to the land of their parents and grandparents: Macao. They started to feel pressure to leave Shanghai. In the heat of the Cultural Revolution the new Chinese government did not see foreigners in China as a good thing. The Portuguese left as did the English, the Americans and the French, etc, said Father Lancelote, whose words seem as though they are narrating a film. 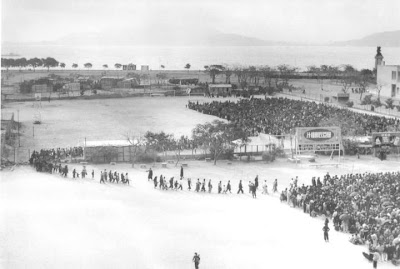 The Shanghai Portuguese worked in banks and in other companies. Some were bosses, others employees, but almost all of them had good academic qualifications. At the beginning it was normal for them to be helped by American and French missionaries. Then it was a question of time and dedication until they made it in life. With nationalisation of companies unemployment came along and people had to find other places to live.Once they had arrived in Macao the refugees received help from Santa Casa da Misericrdia, and money to pay for expenses was sent by the Portuguese Foreign Affairs Ministry.
From that time Lancelote still remembers the feature films and musical shows that were the entertainment at the Canidrome every Saturday: It was all organised by the refugees. They played, sang and danced. It was immense fun! he said, adding: People felt safe in Macao. The territory was under Portuguese administration and China respected the agreements signed by the two countries. The only problem was the loneliness of some people, but I was there every day to raise their spirits.Abandoned boys from Macao and China lived alongside the Shanghai refugees. The police would take them off the streets and hand them over to be cared for by the nuns.From 1941 onwards there were also many refugees from Hong Kong in Macao, fleeing from the Japanese invasion of the then British colony. 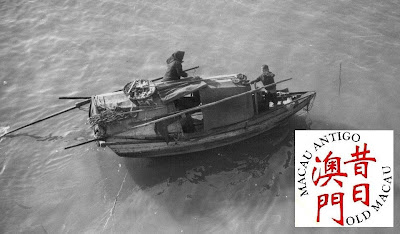 From Macao to the world
One of Father Lancelote Rodrigues' biggest challenges was re-housing around 2,000 refugees taken in by Macao during the Cultural Revolution.In 1953 and 1956 President John F. Kennedy, under the terms of the Refugee Relief Program, opened up the United States to refugees who proved they had family living in the country or who could find a sponsor. In order to do this the help of the office of the Catholic Relief Services in Hong Kong and its representative in Macao, Father Lancelote, proved to be vital.
In many cases people were welcomed by US dioceses, who were charged with finding them a job and somewhere to live. As well as the United States there were also refugees who travelled to Brazil, to Sweden and to Mozambique. In the United States many went to work for banks and other companies. Some went back to studying, graduating in engineering and architecture, he said, lamenting the fact that this movement did not contribute to boosting political and trade relations between their new countries and China.Interestingly there are no records of any refugees going to Portugal. The war in Africa was underway. I actually spoke to Caritas Portugal that said it could do nothing. In logistical terms it was very difficult, he explained.
Although they all arrived with the refugee label, there were those who did not need the help of the Macao government as they had money deposited outside Shanghai, or they quickly managed to get work in Hong Kong, or even in Macao. It did not take long for some people to leave the refugee camp and rent a home. However, 116 people remained there until the end of the 1970s, which meant we had to put up a building to house them, he noted.When the Hong Kong Catholic Relief Services left, in 1962 Lancelote took on the role of running the non-governmental organisation, a role he added to that of director of the Secretariat of Diocesan Social Assistance Services. In a diplomatic way he called on the United States Consulate-General in Hong Kong, Oxfam (United Kingdom) and Macaos Public Assistance, with the aim of collecting funds to build a block of 70 apartments. The campaign collected US$86,000. In exchange Oxfam asked us to house the blind people that came from China. So we decided to put them in the same building, along with the Shanghai refugees and some poor people. The building was pulled down in the 1980s, he noted.
At the latest meeting of the Macanese Communities, held last year in Macao between 27 November and 5 December, Father Lancelote once again met some of the refugees whom he helped to start a new life. 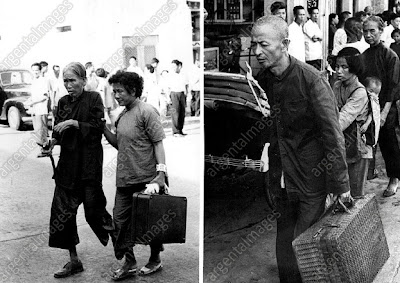 Vietnamese
In March, 1977 the first Vietnamese refugees, known as the boat people arrived in Macao. As soon as they got near the coast the police took them into detention. We had to ask the governor for permission to take care of them. The diocese put them on Ilha Verde and made the Childrens Home (Casa de Beneficncia ) available and the military provided us with K-H, he said.Initially mainly South Vietnamese came off the boats, and those from the North came later. In total, over 30,000 passed through Macao. Many ended up in Hong Kong, where they live until this day. The United Nations Organization worked in partnership with the Catholic Relief Services and nominated Father Lancelote as its representative in Macao.
The most important thing was to provide employment and access to health care. We managed to get them jobs in public construction work, he noted, then outlining other projects: UNESCO [a United Nations agency] paid students fees, whether or not they were refugees. And the Portuguese Red Cross helped the blind and unprotected children. We also had the precious help of the Rotary Club to raise funds. In terms of re-housing refugees from Vietnam, the Catholic Relief Services worked with several consulates, specifically from the United States, Australia, Canada, Germany, Norway, Denmark, the Netherlands, Sweden and France. Between 1977 and 1991 almost all of them were sent to other countries, with the exception of two people who remained in Macao.

The K-H refugee camp, in Coloane island, closed in 1991. The Catholic Relief Services left Macao in 1992 and Oxfam continues to be very active in Hong Kong.As well as the Shanghai Portuguese and the Vietnamese, in the last few decades several thousand refugees have passed through Macao from China, Indonesia, Burma (now Myanmar), Malaysia, Laos, Cambodia and East Timor.There are currently some political refugees living in the MSAR from Pakistan, Syria, the Lebanon, Laos, Cambodia, Burma (Myanmar), Indonesia and Malaysia. It is the job of the representative of the United Nations High Commission for Refugees in Hong Kong to look after their safety and well being.Father Lancelotes contact with the UN nowadays is merely cordial.
Other work 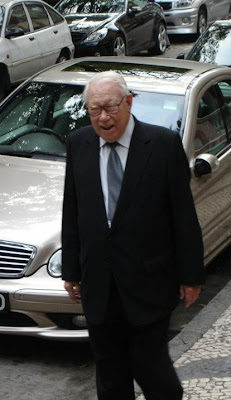 At 87 years of age, Father Lancelote Rodrigues currently heads up the Catholic Social Services, whose mission it is to help the neediest people in the areas of housing, employment and education. He is also the director of the So Pio X Music Academy (120 students and 12 teachers) and representative of the consulates of the United States, Great Britain, Australia and Canada in Macao, providing them with logistical and bureaucratic support in issuing visas.The Catholic Social Services are housed in the Macao Cineteatro building, located in from of the Catholic Centre facilities, two buildings funded by the US government and the Catholic Relief Services.
In China, specifically in the provinces of Guangdong, Sichuan and Shaanxi and in Inner Mongolia, Lancelote also coordinated the construction of bridges, sewage networks, water collection stations, power supply facilities, several schools, clinics and hospital and was supported by Fundao Oriente. These projects were later handed over to the respective provincial governments.
He was recently honoured by the Macanese Association and received an honorary doctorate in Humanities from the University of Macao, on 25 November, 2010. He received honours from Prince Andrew of Yugoslavia, from the Red Cross, from the British Empire, the Australian Government, the Macao Government and the Portuguese Government. Every Sunday Father Lancelote addresses the population in Saint Anthonys Church.
Artigo de José Miguel Encarnação publicado na revista Macao Magazine - nº 6 Janeiro 2011 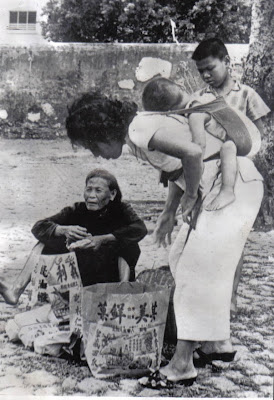