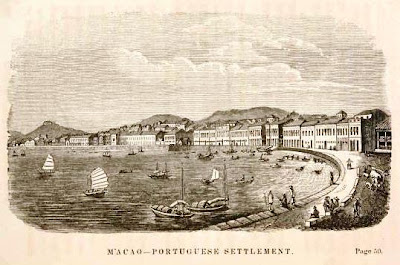 22 de Abril de 1830- My birthday. Have completed my twentyninth year. Who can tell what a day may bring forth. By the rapid flight of years, may I be admonished to work while the dav lasts, and to wait on the Lord continually. Wait on the Lord, be of good courage, and He shall strengthen thine heart ; wait, I say, on the Lord.
May 1st. Arrived at Macao on the 19th inst., in the Steamer Forbes, the first ship of the kind that has ever visited these shores. She's a wonder to the Chinese; hey call her Fo Shune, The Fire Ship.'
(...)
19th. This afternoon, I have concluded, if the Lord will, to go down to Macao, for a short season. I know of nothing to prevent, while I think there are i seasons for going. Health and the assistance of Dr. Morrison, are the principal reasons. Though not out of health, yet an attention, a scrupulous attention to its preservation, is doubtless a duty. I must not presume on too much time from the Dr., yet hints, such as he may give, from a personal acquaintance with my progress, may be of great service.
Yesterday, at 1 o'clock p. m., Messrs. Abeel, King, and myself, arrived here (Macao), 22 hours from Canton.
(...)
Had a stranger, entirely ismorant of the moral character of this place, wandered hither, he might easily have supposed that he had reached a favored spot. Had he travelled from the north, south, east, or west, he might have come hundreds, nay, thousands of miles, without having met with a scene like this. Here, in the very neighborhood of idol-temples, of idols without number,
he hears the sound of the "church-going bell," and sees amidst two or three hundred houses, built in the European style, thirteen or fifteen chapels, which seem to invite to the worship of the true God. Early in the morning all was quiet, and the stranger anticipated a day of rest, but as the hours passed on, the hum of business nearly compelled him to belieye that he had missed his reckoning, and that it was not Sabbath day. All the public offices of the Portuguese government are closed, and all the citizens and residents of the place, I believe, are permitted to spend the day according to their choice. All their chapels are opened, but I can not learn that more attend
on this than on other days, nor that among all their numerous and learned clergy about forty or fifty in all there is one of them who comes forth to the people to read or expound the Scriptures. The British Factory have a chapel, too, in whicli, during their stay here, which is usually half of the year, services are regularly performed by their chaplain.
(...)
August. In my walk this evening I visited the grave of Cursetjee-framijee, a Parsee who died in Macao last winter ; the inscription upon his tomb is in both his native and the English tongue, and ends with this Scripture: A pleasant thing it is for the eyes to behold the sun.'
Publicada por João Botas à(s) 22:27