Many Macanese are only known by unusual names that are totally unrelated to their given names. These sometimes use words in two languages (e.g., Portuguese and Cantonese). Prof Alan Baxter and Miguel de Senna Fernandes, in an excellent booklet that includes lists of names (Maquista Chapado, Macau 2004, Instituto Cultural do Governo da Região Especial Administrativa de Macau), distinguish between family or pet names and nicknames. They point out that usually it was the family amah who would give the pet name to the child in her care, and that nicknames "portray the Macanese sense of humour, malice and sharp social observations of everything and everyone".

I shall take a chance and risk offending 49% of our Macanese community in order to raise a chuckle or two from the other 51%. Here goes.
Besides the preparation and consumption of "our kind" of food, one other notable talent we filhos de Macau possess is in the bestowing of apt nicknames. The Chinese also have this talent, but their nicknames can sometimes be cruel when they describe infirmities and physical defects. On the other hand, filhos de Macau nicknames cover all the bases - physical, diminutive, mental, familial, gustatory, and ethnic.
Fílhos de Macau from Hong Kong display the greatest aptitude for nicknames; Macau filhos come second; but our cousins from Shanghai may have strayed too far from their roots and for too long a time to have any real gems among their nicknames – though admittedly this could be due to my own ignorance in that area.
I shall try to categorize and list the better-known and more colorful filho de Macau nicknames. Some of these require no elaboration, but others may require explanation. I shall not dwell on nicknames derived from Anglo-Saxon words - for example, a "Beany" Remedios or a "Pinky" Silva - which do not have that special ethnic flavor of the true filho de Macau nickname, as in an Archie "Búli-búli". Nor do I need to cover the scores of "Juniors" and "Sonnys" of a certain vintage.

A lady once told me that in Hong Kong perhaps one out of every ten filho de Macau was surnamed Remedios. While we cannot verify this statistic,* clearly many, many Remedii exist, and so they are perfect subjects to be given nicknames in order to distinguish the many branches of the clan. We have, for instance, the Capão (capon) Remedioses, the Santa Sancha Remedioses, the Choon Took Remedioses, and many other unrelated branches of this prolific group.


In Macau, a smile always brightens a conversation when the "Very Good Chipido" clan is mentioned. In Hong Kong, we have the "Chiparee" Gomeses, as well as the "Capí (squeeze) Galo" Gomeses. The latter reportedly had an ancestor who was fond of cockfights and carried his fighting cocks tucked between elbow and armpit (thus, capí galo). So they tell me.
And then there is the Sousa family, nicknamed Gogo, where each member is identified by his position in the family hierarchy, thus: Gogo Pai (fathear), Gogo Mano (eldest brother), Gogo Filho (son), Gogo Chai, and last but not least, little Goguinho.


First of the Litter

Elder brothers and sisters are frequently called Mano and Mana, often for life: as in Mano Rodrigues, Mano Osmund, Mana Ozorio. At the other end, the youngest are differentiated by names such as "Ah Lai" (Amah Cantonese for "last one"). When it comes to the girls, little Maria becomes "Marie Chai."

The diminutives used within a family would often carry over to the outside. Luizito became Ito; Emerico and Frederico became Ico; Filomeno became Meno; Agapito became Pito; Lourenço became Chencho or Encho; and Belarmino became Bino.

An Amah's pronunciation could wreak havoc on venerable Portuguese names. Henrique became Ariri, Artur became Atutu. This was probably the way an entire family ended up with their colorful names: Afit, Alichi, Ah Gai, Ah Johnny. The older generation of a clan often bore nicknames that probably came from a childhood with servants: Riri, Merlie, Assau, Ahu, Bachai and Banui.

As an integral part of our heritage, food also has found expression in filho de Macau nicknames. There were the two Rosario brothers known as "Chap Siu" (roast savoury pork) and "Siu Arp" (roast duck) respectively, not to be confused with a later Willy "Siu Arp" Gutierrez. And then there were the two Macau Xavier brothers: "Isso" and "Chouriço" (a Portuguese sausage). There was "Tau See" (black bean) Carvalho, Victor "Paio" (another Portuguese sausage), João "Papaya," José "Vaca" (cow) and his brother Charlie "Vaca, "Meme" Ade Salgado" (salt duck), Annui "Chin Tooi," Mally "Muchi," and a greying senior who was for evermore known as "Baby Lactogen." And finally there was that dark gentleman who would smother his torso with Johnson's Baby Powder after every shower, earning for himself the name Ladoo (a dark dessert covered in white bean powder).

Up Front and Personal

We had two Dicky Noronhas, one dark and one fair. They were distinguished by the filho de Macau as Dicky Blackand Dicky White. Simple. Among the many Maries, we had Mary Doida (mad) , Marie Gorda (fat), and Marie Surda (deaf). And a gentleman with a bulbous nose resembling a Swatow tangerine was called "Chiu Chow Kum" (though not to his face). There was a pockmarked old gentleman who was nicknamed Henrique "Pique Pique." Another whose voice sounded like Donald Duck became known as "Quack Quack." And a friend whose upper front teeth were missing became Lichi "Goal Post."

I have to end. But remember this treatise is not meant to be comprehensive. So if you or yours were left out, please do not be offended. You may well be included in a later work.
However, if you or yours received honorable mention, then also do not take offence. What I have been trying to show is simply that popular and colorful individuals often carry distinctive and colorful nicknames. As I said at the outset, we filhomacaus just seem to have a knack for acquiring nicknames. 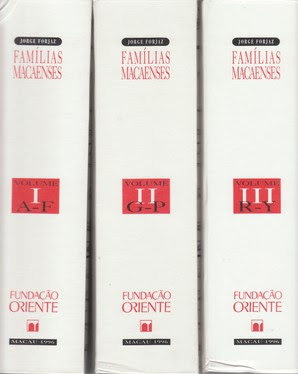 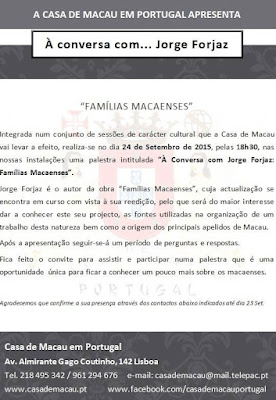