Feast of the Drunken Dragon, held on Buddha’s birthday, is a lively event tied to a colourful legend. 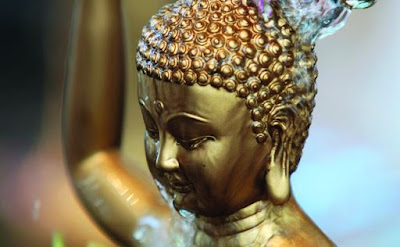 There are many stories behind the Feast of the Drunken Dragon, each one more beguiling than the last. Held on the eighth day of the fourth month of the Chinese lunar calendar, the event attracts thousands to the streets of Macau every year.
According to one legend linked to the festival, a man fell into a river in which an enormous snake dwelled. Villagers pulled him out of the water and saved his life with a drink of special spirits. Intoxicated, the man went back to the river and killed the snake, cutting it into pieces so that it could never again threaten the village.
In another version of the tale, Buddha quartered a dragon while he was bathing in a river. Later, the creature’s head and tail were found by a drunk fisherman who, despite searching, never found the rest of the beast. 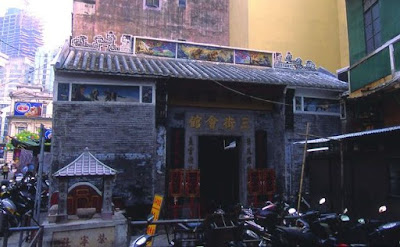 The most common story, however, tells of how the residents of a Xiangshan district in Guangdong province – Macau once belonged to this municipality – were suffering from a terrible plague. On the birthday of Buddha, a group of residents carried his statue across a river in hopes of finding a cure. Suddenly, a giant snake surged out of the water, and all the people fled in terror except for a monk. He cut the snake into three pieces using the sheer strength of his hands, and the reptile’s blood poured into the river. When people later drank the water, they were cured of the plague. This led to the belief that the snake was the incarnation of the dragon. 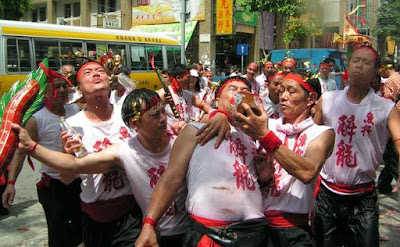 The first written record of this event appeared in an official document in 1547, during the reign of Jiajing, emperor of the Ming dynasty. In the late 19th century, hundreds of Xiangshan people moved to Macau to avoid the wars, bringing with them the tradition of the festival.
Celebrations start on Buddha’s birthday, when all the statues of Buddha in the temples throughout Macau are ceremonially washed. Performers then carry out an elaborate dance in honour of the dragon and parade through the streets of the city. At the same time “longevity rice”, believed to bring good health, long life and good fortune, is distributed among those who attend the event.
The dozens of dance performers wear white tops emblazoned with the characters for the drunken dragon. They carry the head and the tail of the dragon, which are carved out of a precious wood such as camphor, elm or teak, and have a deer horn attached.
Their performance begins at Kuan Tai Temple, a historic centre near Senado Square, where Taoist priests pour water on the wooden dragon models to purify them while burning incense in front of a statue of the dragon. 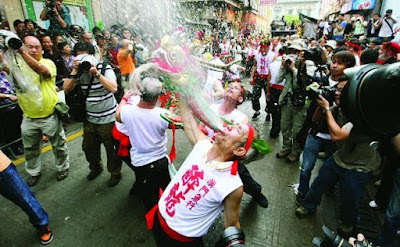 The dancers are supposed to be mildly inebriated to imitate the monk from the legend. In the past, they would drink rice liquor to enhance their energy and excitement, but now beer is also acceptable. They perform for around 30 minutes in front of the meeting hall before parading through the streets.
Article by João Botas published on Destination Macau magazine - May/June 2015
Photos by ICM/SCMP
Publicada por João Botas à(s) 23:47