Macanese Members of the Hong Kong Volunteer Defence Corps
Many Macanese men fought – and some died – in the defence of Hong Kong during the Japanese invasion in December 1941. Prisoners of war were interred in concentration camps in Hong Kong and elsewhere, where more died. The defence of Hong Kong is recorded in an excellent website called Hong Kong War Diary created by Tony Banham. Another valuable source of information is the website of the Commonwealth War Graves Commision.
Text by Henry D'assumpção
"Prior to the battle of Hong Kong, many young Portuguese/Macanese men joined the Hong Kong Volunteer Defence Corps. Primarily they became members of the two Portuguese Companies: Number 5 (under Captain Chris D’Almada e Castro) and Number 6 Light Anti Aircraft (under Captain Henrique A. de B. Botelho). Between them, these two companies mustered some 200 young men. 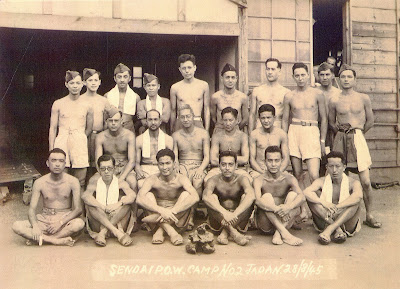 "Other Portuguese joined other Volunteer units, such as the artillery batteries.Through a combination of luck and quick wits (one Portuguese machine gun section captured by the japanese in Causeway Bay apparently pleaded neutrality and were released - quite a feat while holding loaded Lewis Guns!) their casualties once battle was joined were slight. However, unlike the local Chinese volunteers who were released from Prisoner of War camps early, many of the Portuguese were taken by ship to camps in Japan from which they were not liberated until August 1945."
The attached photo shows a group of Portuguese POWs at Sendai POW Camp in Japan, immediately after the Japanese surrender.

Text by Tony Banham who also send me the photo he his the autor of http://www.hongkongwardiary.com/
Hong Kong War Diary - a project that documents the 1941 defence of Hong Kong, the defenders, their families, and the fates of all until liberation.
Publicada por João Botas à(s) 13:14