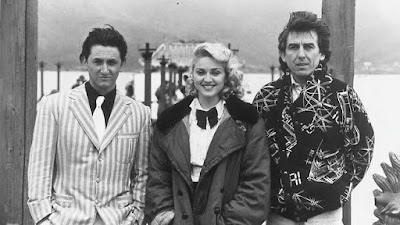 
Ever since it was settled by Portuguese traders in 1557, the port city of Macao has coexisted peaceably with its one billion neighbors in the colossus of China. When Macao's four centuries of serenity were suddenly shattered several weeks ago, it was not the Chinese who were at fault. No, the culprits were two outsiders from Hollywood,Madonna and her combustible husband, Sean Penn. Penn, 25, who never met a photographer he liked, turned the exotic enclave into the backdrop for yet another rumble with a journalist. The victim this time was Leonel Borralho, 61, a reporter for the racy Hong Kong Standard, who got too close to the pair with his camera. Claiming he was roughed up by Sean and his beefy bodyguards, Borralho is suing Penn for $1 million.
The visit to Macao, where the couple is filming the romantic adventure Shanghai Surprise, started amiably enough Jan. 15. Hordes of little Wanna Be's staked out the lobby of the elegant Oriental Hotel, clamoring for a glimpse of their Western idols. Borralho had a better idea. He hid on the Oriental's 18th floor, where the pair occupied a suite. One afternoon as Madonna and Sean stepped off the elevator with their entourage, Borralho popped out from behind a service door and started snapping away. Penn's hired muscle quickly collared Borralho, while the actor flew into a rage. "What are you doing here?" he bellowed. "Who let you in? Can't you see my wife is trembling?"
As one bodyguard restrained Penn from taking a poke at Borralho, other guards tried to yank his camera from his neck. The strap held, injuring his neck, Borralho claims. He was eventually allowed to leave after surrendering his film to a bodyguard, who promised that in return Borralho would get an exclusive interview with the couple. Naturally he didn't, and that's when Borralho sued. 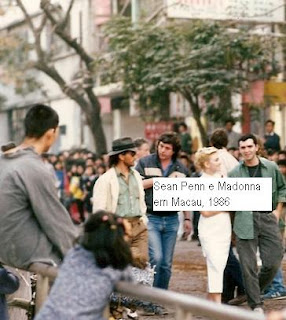 Word of the fracas spread, and editorials labeled Penn the "Ugly American." They hadn't seen anything yet. When the film's veteran publicist Chris Nixon suggested to Penn that he and his wife pose briefly for photographers as a sort of truce, Penn seethed. "Your job is not to cater to the photographers but to the film and me!" he yelled. Retorted Nixon, "My job is to promote the film, and right now it needs the publicity!" Penn then had Nixon canned.
While Sean was sweating out his newest lawsuit -at least two similar cases are pending in the U.S.-Madonna was sweating in the hotel sauna, where she was cornered by a reporter. Asked if she was enjoying herself, Madonna answered wearily, "What? Being harassed? No. We didn't think we'd have any problems here." She said charges against her husband were exaggerated. "That guy [Borralho] acted like a real jerk." Besides, she said, "I never read anything about myself. It's always lies." As for her adoring fans, they are poor souls who probably "lead such boring lives. Then they read in the paper reports detailing the lives of celebrities - their every move. They admire them and end up fantasizing about them."
Meanwhile, a court in Macao will have to hear the case with Penn absent; the pair was due to leave the city after several weeks. Borralho says that if he wins he will donate half of the proceeds to charity. "What I am after above all is a formal apology," he says. "Sean Penn is unlike any other celebrity I have ever encountered." Mr. Borralho, meet Mr. McEnroe.
Publicada por João Botas à(s) 15:24